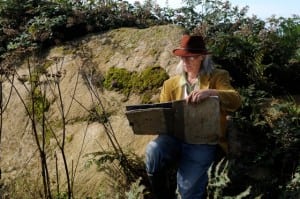 The area within which Cook finds that inspiration for his landscape paintings reaches from Dartmoor in the north to the Scilly Isles to the south, and is centred on the area around his Newlyn home, especially the sands of Lelant. It is on this spot close to St Ives, where the river Hayle reaches the sea, that Cook has returned again and again in the search for an image. As with all estuaries, the contours of the river shift according to the state of the tide, the division between land and sea being, as it were, endlessly negotiable.

Quoted from the essay ‘Scapeland and Inscape’ by Michael Archer which accompanied the exhibition and publication, ‘Richard Cook – Luminous’ at Tate St Ives in Spring 2001.